The Graham and Dodd formula versus DCF

where Y is the discount rate or, as they put it, the AAA corporate bond rate. G is the expected growth rate, both expressed in percent. The formula is not really derived from anything. It is more of a "rule of thumb" than anything else.

I thought it would be interesting to see if I could try to derive it (or something like it) from the discounted cash flow (DCF) analysis.

DCF, first popularized by John Burr Williams, posits that the value of a stock or any security is the sum of the discounted cash flows that it is expected to produce for the owner. When I do DCF calculations, I usually choose a growth rate and some number of year that it will grow at that rate. Then I assume that it stop growing for 20 years and vanishes after that. Usually, I use 6 years for the number of growth years. So this DCF PE estimate will depend on the two variables G and the discount rate Y and we can compare these to the Graham and Dodd formula above. I calculated both of these on a grid of Y and G. Here are the results. 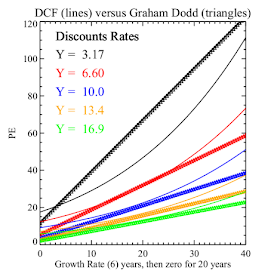 This plot shows PE plotted versus the discount rate for five different values of the growth rate in five different colors. As before the lines are the DCF and triangles Graham and Dodd. The Graham and Dodd curves are too steep at small discount rates. One can see from the formula that it scales directly with 1/Y so goes to infinity as Y goes to zero. The DCF does not have that feature if you truncate it after some number of years like I have done. Note also that the very low growth rates (the green curve) are off by quite a bit. 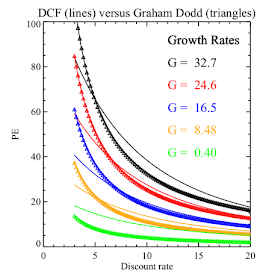 So Graham and Dodd seems to be a quick and dirty way of giving PE results similar to DCF but it by no means exact. In the days before computers, that might have been helpful but now it seems the formula is somewhat obsolete.

There is also the exact DCF result when you assume a small constant growth rate into eternity and a discount rate. The DCF simply becomes a geometric series which can be summed if G is less than Y. The well known result is
PE = 100% / (Y-G) which is different in form from the Graham and Dodd formula. Note also that they differ greatly at G=0. The DCF perpetuity gives PE = 100%/Y and Graham and Dodd gives PE=37.4% / Y; they are off by almost a factor of three The difference could be explained easily by saying that a stock is not guaranteed to produce a stream of earnings forever and should not be valued as if it is. Or one could say that unless the earnings are actually payed out in full, you should not value them at full value. Some combination of these two arguments can easily explain the uselessness of the perpetuity formula.
David at 8:20 PM
‹
›
Home
View web version