Lets make some numerical estimates about how severe swine flu could be for the US.

Start with the US population which is about 300 million people.

Lets discuss two scenarios. One is the mild scenario and the other is the severe one. Obviously, it could be anywhere in between and even outside of these two bounds. But I would say, to my knowledge, that these two scenarios contain about 80% of the possibilities.

Lets pick a time scale. Assume it lasts about two years with some tail before and beyond that.

Now we need to estimate the attack rate. What percentage of the population will get it? From what I have read, I think this is between 20% and 50% of the population. These are my mild and severe scenarios.

Lets start with the death rate since it is pretty well studied wit this current strain. Most think it is between 0.2% and 0.5%. Obviously this is dependent on the quality of health care received which will be affected by the number of people that get dangerously sick compared to the heath care resources available.

So right off, we can estimate the number of people that will die using the mild and severe scenarios. This is

Obviously that is a huge difference. Consider that this flu seems to be more severe for young people rather than the usual target for influenza which is infants and the elderly. See age distribution below from a study in Mexico. 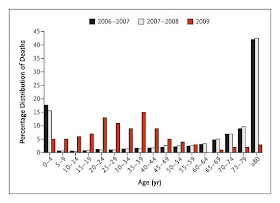 Lets look at the three age groups, 5-14, 15-24 and 25-34 who will probably suffer about half the case of H1N1. Lets look at their morbidity statistics, that is the chance of dying in any one year. This is usually done in deaths per 100,000 people. There are some numbers here for these age groups. It has all causes and individual causes including Influenza (which is linked with Pneumonia, see below).


Even for the mild case, the number of people in these age groups that will die of influenza will be 7 to 25 times higher than usual. It will be the major cause of death next year for this age group. The mild case will increase the change of a 5-14 dying (of any cause) by 31%. The severe case would double the chance of dying for 25-34 year olds. For 5-14 year olds, the chance of dying has increases by a factor of 6.7.

People often say that the flu kills 36,000 people per year so this H1N1 is nothing to worry about. But this is wrong. First of all, as I mentioned Pneumonia is linked with Flu and "influenza-like illness". Flu by itself actually kills less than 1000 per year and less about 142 children under the age of 18. source .

Using these number above and assuming the average high school has about 1000 students, the mild case would imply that one in every five high schools will have a swine flu death (in two years). The severe case would say that every school would average 2.5.

Now on to another issue: health care and its ability to handle the situation. I will only focus on one issue, the availability of ventilators. Severe cases of swine flu require the patient to put on a ventilator in order for them to breath, sometimes for weeks. The US has about 100,000 ventilators and 80,000 are in use in normal times. During flu season, most of the others are in use as well. Lets look at how swine flu could impact this. For the mild case, we assumed that 0.1% of people who get swine flu will die. Lets assume that 10 times this amount are put on ventilators so that 90% of people that are put on ventilators will live. So this is 1% of swine flu cases requiring ventilators. If we assume that each requires it for a week, this works out to be 3,000 people needing ventilators for swine flu if you evenly distribute it over two years. However it won;t be evenly distributed. It will probably peak about three times this average so that is 9,000 ventilators. This is beginning to stress the system but is probably manageable with some rationing. For the severe case, there are five times more cases which means 14,000 ventilators are needed (evenly distributed) and maybe 42,000 in peak periods. Now we are talking major panic. There will have to be major rationing. The system is completely overwhelmed. Consider that the ventilators will not likely be in the optimal places. What if New York has too many but San Francisco has too few. Imagine the chaos and ethical dilemmas that hospital and politicians will face. Canadian hospitals have been reporting that young people suffering from swine flu have required a special kind of ventilator call an oscillatory ventilator rather than the usual kind. How many of those do we have?

Other questions to consider. How many does of Tamiflu and Relenza do we have? If we run out of that, the death rate will surely rise. There is the issue of vaccines. Hopefully these will be finished in time to slow the spread. I have my doubts.

The Washington Post has a story on the stress on the health care system.

Consider the following statistics which they give

The swine flu virus, also known as H1N1, could infect up to half the U.S. population, making as many as 1.8 million sick enough to need hospitalization, including as many as 300,000 who might need intensive care, according to a presidential advisory council estimate.
... "There will be millions and millions of people seeking care in a relatively short period of time," said Eric Toner of the University of Pittsburgh's Center for Biosecurity, noting that the nation has only about 85,000 critical-care beds.

What he didn't say is that most critical care beds are being used at all times. Hospitals don't plan to have many more beds than are usually needed. That would be too costly. So we might assume, optimistically, that 70% on average are being used at any given time which leaves only 26,000 free beds for possibly 300,000 critically ill people. Now, it might not be that bad. But even if it is 100,000 critically ill people with 33,000 available beds, that will be a disaster. Two-thirds of the sick people can't get an ICU bed and may die because of it. Now consider that as much as half of the healthcare workers could be out of work due to infection of themselves or their dependents. Can they even operate at 100% capacity with half the workforce and three times as many people needing emergency ICU care?

Looks like there is more evidence on the death rate being much, much smaller than first thought. Looks like it is more like 0.1% or maybe even 0.05%. So this would be even milder than my mild scenario. Lets hope this is correct.
David at 7:17 PM
‹
›
Home
View web version